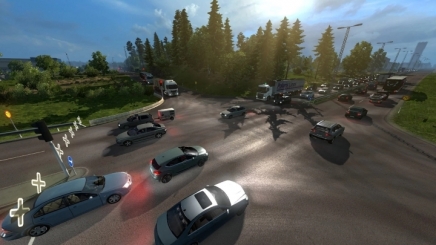 This mod is the revival of the popular “DP’s Realistic Traffic”
This mod not only increases the density of the traffic but also changes its behaviour to create a busier and more fluid experience.

– Increased traffic in general, which creates a more realistic feel
– Dynamic density based on time of day, expect peak rush hours, quiet nights and everything inbetween
– Traffic has less patience and safety for itself, merging into traffic a lot faster
– Queues that do build up are quicker to filter away
– Police spawning now varies depending on which state you are in
– Supports distant vehicle sound improvements when used alongside Sound Fixes Pack mod
– More realistic traffic signal durations for better traffic flow
– Car to truck proportions are more realistic
– Car to bus proportions are more realistic
– Street cleaners and farm vehicles only run overnight
– Compatible with most traffic packs

For best results, your g_traffic setting should not exceed 1. Values above 1 are no longer supported. Give this mod the highest priority
unless another mod says otherwise.