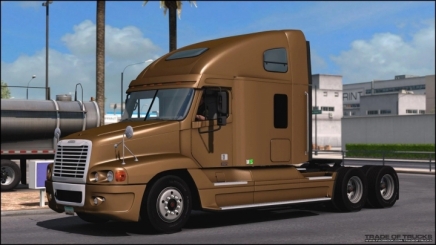 Mod into two trucks: Freightliner Century & Columbia
In orders is not yet determined.
So created initially.
The brands dealer from modifications will be registered in the cabin: “Freightliner”
Autonomous…
You can buy in the official dealer: “Freightliner” only in the game ATS!
Beautiful inner interior, three types.
Support “DLC – Steering Creations Pack”, registered immediately into the truck.
Support “DLC – toys” for ETS2 and ATS games (DLC – Cabin Accessories) is registered immediately into the truck, does not require additional modes.
Two cab options, they are hood.
6 chassis options: long; long 6×4; long 6×4 300Gal lifting axis; LONG 6×4 lifting axis, are the main!
The names of the chassis variants were updated due to the addition of the rear lifting axes.

Chassis: LONG 4×2 and 8×4 were completely removed from this mod. In the future it will not be installed.
A large selection of engine variants, all with your sounds.
6 PPC options: 10/13/18 + Retarder.
Added an animation of brake, animated buttons of the windows, animation of the trailer handbrake and a truck handler, are rearranged by places.
Removed the second bed “Top” is made at will.
Removed overweight custom tuning.
Removed error with rain drops with open windows.
Fixed black textures of the cabin: sleeping bags, chairs, curtains and so on.
Fixed reflection in the right lower chrome-plated mirror.
The brake lever is rewritten on the trailer, now it works correctly. (Earlier it worked as a retarder)
Sounds: FMOD, have been changed and supplemented in connection with the introduction of a new update 1.39.x
Replaced Texture of chrome on the “saddle” (trailed device), leading bridges and a cardan shaft.
Painted frame and its components.
Added steered, replaced previous icons when choosing steering in tuning.
Skins have been added. (Installing individual mods on the same, the most skins are not required).
Changes in appearance when buying a modification brand from the dealer and when viewing in the gallery.
Added exclusive illumination to the solon in the form of a dragon from DLC.
Added horses, with the ability to choose any option you like.
Added flashing lighthouses.
Updated curtain textures.
Removed old cable options, they are now replaced by the stock size.
Changed interior of the cabin.
Some materials are corrected.
Added new options for rear bumpers.
Added mounts under a number sign on the front bumper.
Added slots to install additional lighting.
Removed extra antennas.
Changed the texture of the animation of the steel exterior and interior.
Added basic plastic mirrors.
Conflict protection has been established in order for accessories not compatible with each other visually did not give up each other.
And much more.

Important!
For the correct operation of the Fashion you need to update on the mod “SISL`s Mega Pack” Cabin Accessories with registration specifically for this truck … (registration from Schurik43rus).
The mod is set separately.
For this reason, do not use the “SISL`s Mega Pack” Cabin Accessories, until its full update under the current version of the game.
Part of the data of accessories is already maintained in the truck.
Support: “Cabin_Accessories_DLC_FOR_ATS”, this mod add accessories from the ETS2 game.
The code is registered in the truck, removed the registration and textures of the curtains on the windshield, removed the registration of the same accessories.
Do not conflict with a truck: “Freightliner Argosy v2.5 / v2.7 1.38-1.40”.
I do not recommend using both options in the cab, as they are interchangeable.
In this case, if you use third-party fashion for accessories!
The game update allows you to now use your accommodation in the cabin, which leads
To the incorrect display of accessories from third-party modes.

The presence of “DLC – Toys” (DLC – Cabin Accessories) must be in your add-ons to the game purchased!
Without it, there will be no accessories, or will not be correct.
The back of the overall lights requires the installation of accessories from Flat-Line fashion,
The same modes sets overall lights on the tanks.
This mod requires an official update from the author: Virat8 (BluePrint Mods) under the version of the game V.1.40.x-1.41.x
Mod updated, author: Virat8 (BluePrint Mods).
Attention!!!
Before putting a new version of the Fashion, sell a truck from the old version of the Fashion, then disable it from the list of modifications.
So that there are no conflicts and hanging the game.
I do not recommend installing this truck in the ETS2 game, as the mod was created precisely for ATS.
Updated and tested on version “V.1.41.1.66.s. (64bit)”
Authors: Schurik43rus, Renenate, SCS, Dark Lord, Sanék September, Virat8 (BluePrint Mods), Kapitan Kriechbaum.
Avora is indicated who participated in general in general for the entire period of its existence, as well as accessories and additional details taken from these authors.

Authors: Alexander Sentyakov, Schurik43rus, Renenate, SCS, Dark Lord, Virat8 (BluePrint Mods). The authors of the sounds of engines were not indicated, they are known to everyone. The mod is the alteration of the author's fashion from Alexander Sentyakov