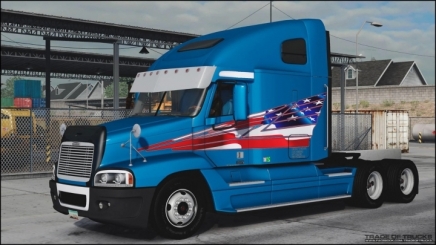 – Updated to the version of the game 1.44.x;
– removed custom tanks;
– two options for steps (BOX) in painting and chrome were removed;
– Added lighting accessories for installation on the front bumper;
– replaced the front caps that cover the hub;
– all fashion tires, wheels, nuts, hubs, hubs, caps were removed (for those who need them put a mod separately, I don’t remember the author, it seems to be Smarty);
– numerous corrections in the registration of the truck;

A complete list of updates, as always, will already see during testing. P.S. I make a truck mod exclusively for myself, if I see problems and I can’t solve them, I try to remove this or that accessory out of mod. For lovers of past fashion options, there is always a previous version.

Especially important! After installing the mod, always disconnect and finish the flight on the old version of the mod, and only then put this, having previously deleted the old version of the modifications. This mod is only for a single regime, it is not provided for in convoys, I did not solve the departure problem. The mod needs to be rebuilt completely in a new name, each truck must be prescribed separately.

Authors: Schurik43rus, Renenate, SCS, Dark Lord, Sanék September, Virat8 (BluePrint Mods).The authors of the sounds of engines were not indicated, they are known to everyone.The mod is the alteration of the author's mod from Alexander Sentyakov