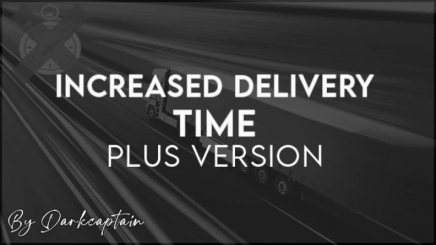 Updated for ETS2 1.45
This is an expanded version with respect to the standard version, it will have more time available to make deliveries

Features
This mod extends the timeframe for deliveries (the parameter “simulation_avg_speed” has been reduced from 62 to 30)
*Note: Workers will take longer time to deliver. If this is important to you, I recommend the “Standard” version or not to use this mod
If you have an active order, the extratime will not work until the next job!

Compatibility
– This mod may be affected if you use another Economy Mod, don’t use it!
– Tested with ETS2 1.45 versions
– Not tested with World of trucks Jobs