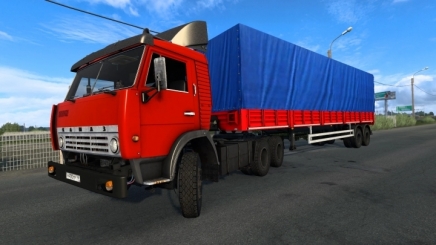 Autonomous, does not replace anything, a KamAZ or Volvo modification is bought from dealers.
It has 2 chassis and one BDF Tandem.
It has 2 cabins without a bed and 2 with a bed.
Standard tuning.
It has 6 varieties of road tires.
It has 6 types of road rims in front and 5 in the rear.
There are spiral cables with physics.
There is no advanced hitch with standard trailers.
Calibrated camera and new cockpit physics.
There is inventory in the interior and bonuses from STIM.
Unfortunately, there is no window animation on the narrow cab.

Last changes:
Attention: Errors are excluded, since the mod was tested on a test profile!
A complete conversion of the entire 3D model of the truck has been carried out.
Found and fixed errors in “TOBJ” files during conversion.
Added new passengers – girls.
Glossy paint marks were added in the amount of 42 pieces.
Updated pneumosignal on pipes.
Updated physics on all chassis.
Updated and fixed in companies, desktop and dealers.
Full optimization of the 3D model has been carried out.
Cosmetic cleaning of the 3D model from excess debris was carried out.
Fully optimized and ready to play!
The game log is 99.9% [percent] clean.