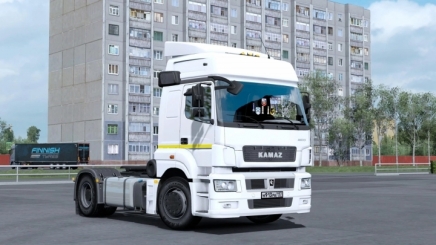 Version 1.1.1:
Made chassis 8×4 dump truck for K5
Made a cabin without a sleeping bag for dump truck in K5
Made salon for a new cabin in K5
On the chassis 8×4 from the actrum removed the extra details in K5

Note: 2 engines on KAMAZ 65207 do not work! (There is no sound on engines with a dark engine picture)
Disabled engines circled red in the screenshot number 6 (last)

Changes in v1.1
The basis was taken patch from Vasja555
The mod was recycled and invested in one archive, now 5490 and 65207 is the same KAMAZ, from here:
General cabins – now you can install a high cabin on 65207
General Salons – Bug with Disappeared Textures No more
Common Tuning – You can install kenguryatniki and Lightabars, wheels, flashers, and spoilers

K5:
It was added, but as a separate machine, no changes, except:
New Frame – 8×4 from Mercedes Actros MP4

Famous bugs:
Missing wheels K5, when buying, you need to install others
A small difference of the shade on the white paint at the tank and cab cabin K5
Standard SCS Cables 65207