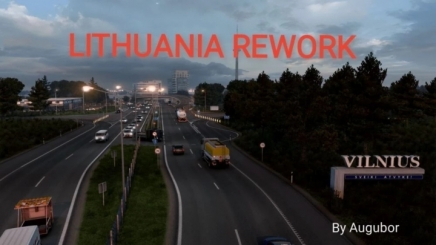 We are happy to announce you LITHUANIA REWORK Promods add-on, which includes both Vilnius Rework and Lithuania Promods add-on! “Lithuania Promods add-on” adds a lot of new roads in north part of Lithuania. Since some roads are not ”main” ones, gps might try to avoid it, but the roads are fully working in game world
“Vilnius rework” map mod rebuilds biggest part of Vilnius city and adds a lot of new areas to visit!
Lithuania Rework includes both maps.
Promods 2.61 is required for Lithuania rework to work. If the mod will be popular, we will probably create Vilnius rework version, which do not require Promods.
Put map ABOVE promods in “mod manager”