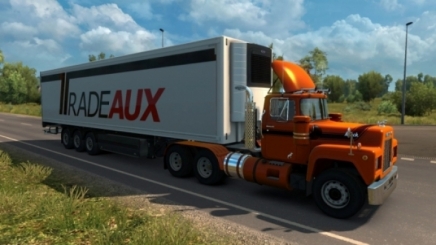 – Real dimensions based on Mack specs,
– Real engines and transmissions with torque curves, ratios and other parameters,
– Fully animated detailed interior,
– All standard SCS truck features, like advanced coupling, trailer cables, etc.
– Detailed models based on many reference photos (thanks to Trayscapes and Google images), with reasonable triangle count which should not kill your GPU ;),
– Beautiful engine sounds made by Kriechbaum (6v92, Mack E6) and recorded by Trayscapes (Mack E6),
– Original paint jobs made by Lucasi, Pauly and me (not my wife this time, she’s babysitting currently ;),
– No errors, no warnings and hopefully not conflicting with other mods (nah, there is always a poor mod that will break things but not this one!),
– Next Gen Scania paintjob system (all skinnable parts have their own templates, except air cleaners, they are on the cab template),
– Currently only R600 hood with day cab.