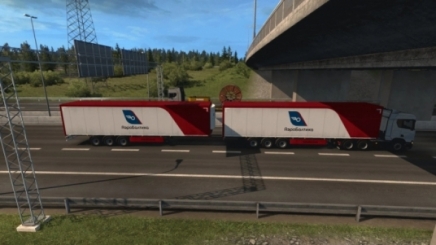 Where it came from:
Someone anonymous did one for earlier versions of both games but it didn’t get updated after an SCS update. It was credited to Jazzycat but although it used his truck models it never appeared on his web site, so I assume his participation was without his knowledge. This one is based on what the original did, but only uses SCS models, has been kept more or less up to date and has had extra bits added to it.

What it does:
Adds drawbar double, HCT double and B-Double trailers in ETS2 traffic.

What’s in the box:
ETS2 Double Trailers In Traffic
Curtainsiders, dryvans, insulated trailers and reefers in drawbar double, B-double and HCT (two full-length trailers linked with a dolly) versions.
Versions of all SCS traffic trucks to pull them with.

ETS2 Double Trucks For CIP Sound Mod
SCS trucks adapted to use CIP’s improved sound mod. REQUIRES ETS2 DOUBLE TRAILERS IN TRAFFIC MOD AND MUST BE PLACED ABOVE IT IN THE MOD MANAGER.

ETS2 Double Trailers For Cargo
Allows double SCS trailers for cargo-carrying in areas outwith the base/DLC maps, except for the Road To Asia bits of Kazakhstan, because the country name is too long. STANDALONE MOD.