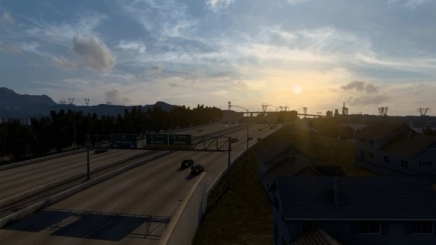 The mod fixes connections in these areas:
Uses Quaristice’s I-580 and I-80 connection between MUO’s Oakland and the refreshed Reforma Sacramento (ATS 1.40-1.43)
Uses PaZz’s I-5 and I-8 connections to Carlsbad and San Diego
Uses n1cky1992’s I-10 connection between PaZz’s Quartzsite and MUO’s Phoenix
Adds I-10 connection between MUO’s Los Angeles and Reforma’s Palm Springs, Palm Desert, and the refreshed PaZzMod areas
It also uses Mega Resources and SCS California signage in the MUO interstates, such as Los Angeles, Carlsbad, San Diego, Oakland, and Stockton. Moreover, as SCS, Reforma, and Quaristice update their map areas, this patch will also be updated to reflect the changes.

Reforma Map and either Minor or Lite Urban Overhaul are required. Not compatible with standalone Sierra Nevada Legacy and PaZzMod.