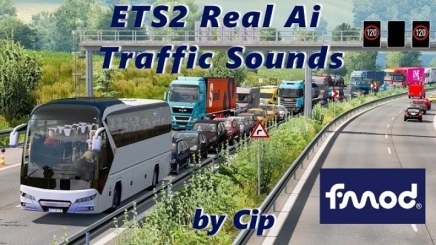 Features:
– this mod includes personalized FMOD sounds for all cars, SUVs, trucks and buses of the ETS2 default vehicles.
– some vehicles received a more realistic speed limit
– most of the Ai cars received personalized real colors
– Ai trucks received also a larger variety of colors
– Ai trucks received an increased spawn ratio (this will not affect density neither the ratio vs cars but is useful if you use truck packs)
– place this mod above any other mods that may include Ai vehicles (map mods, economy mods, company mods, etc)
– my best sound tweaks are traffic slider at about 35-40% and truck engine at 60-70%
– If you have access to my other sound packs available only on my Discord, please keep the base sounds mod on top
– not compatible with other mods which change Ai def files like for example mods which change the speed, colors, torque or ratio of the Ai default vehicles.
– mod is only compatible with game version 1.46 and above
Adapted with ETS2 1.46.2.13s