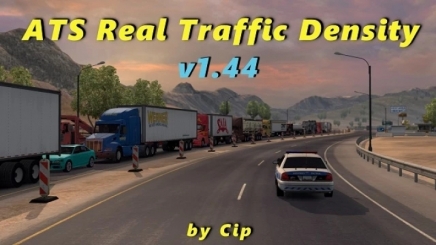 It’s the only traffic mod which added motorcycles, sport and classic cars as separate type of vehicles (available of course if you use these packs and my engine sounds packs for them). These vehicles will therefore spawn following their rules, regardless the numbers of packs used.
My traffic mod is also the only mod which brings a separate speed class for emergency vehicles and also for motorcycles and sport cars, which will drive with increased speed wherever possible (speed limit is not given by road signs). Other Ai can also break the speed limit at random basis with a certain value, up to 35% of the speed limit. Ai cannot drive faster than their limit set in their files, therefore this rule won’t really apply to trucks but rather for cars
Is the only known traffic mod which keeps low spawn on merging roads to avoid unwanted traffic jams while keeping a great overall density

Other characteristics of my Real Traffic Density mod

– Speed limits for existent Ai vehicles is not affected, my mod only changes speed limits for emergency, motorcycles and sport cars
– Semaphore cycle was improved to match with increased traffic density including for left turns. yellow duration after green is also increased you don’t need an additional mod for this!
– Classic cars and motorcycles can also be seen on country roads with low density and reduced speed
– Ai can overtake on simple continuous line on 1×1 roads

Compatibility:
– Vanilla map and all map DLCs
– MHA Pro Map and ProMods if higher priority of my mod
– Not tested in other maps (it should work if you keep higher priority of my mod)
– All existent Ai traffic packs; additional traffic packs are highly recommended, due to increased density you may want to see more model in traffic, not repetitive models