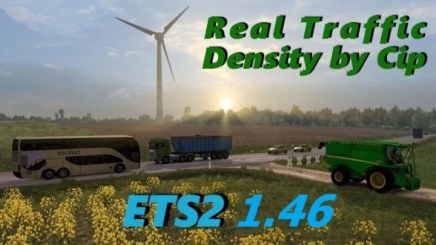 A realistic traffic density mod per daytime and by type of the road, exactly as we find naturally on Europe’s roads.

Other characteristics of my Real Traffic Density mod
Speed limits for existent Ai vehicles is not affected, my mod only changes speed limits for emergency, motorcycles and sport cars
Semaphore cycle was improved to match with increased traffic density (yellow duration after green is also increased you don’t need an additional mod for this) from 1.38 1×2 and 2×1 roads have longer green for 2 lanes roads vs the one lane road within the same crossroad
Slow vehicles can be seen with low density in traffic only in roads with 1×1 lanes and with higher density on country roads
Classic cars and motorcycles can also be seen on country roads with low density and reduced speed
Ai can overtake on simple continuous line on 1×1 roads

Compatibility:
Vanilla map and all map DLCs
MHA Pro Map if higher priority of my mod
ProMods with recommended addon (to be placed above Real traffic density in mod list)