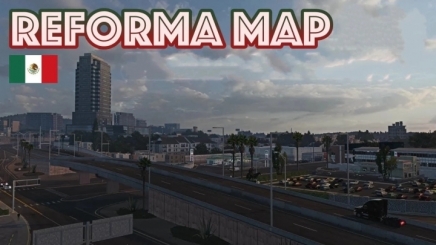 Reforma Map – quality mod which combines maps in one pack for ATS players. Merging Pazz, Mexico Extremo, Mexxsimap, Viva Mexico and free parts of the Eblem beta into one map. Now you can download one pack, connect and play.

Changes in v2.3.1:
– Adapted to the latest game patch 1.44;
– General bugfix over the map, reported by different users;
– Replaced Reforma’s Sacramento to SCS Sacramento, due to map link compatibility. Possibly after the complete SCS California Rebuilt we might do something there to replace back our work and different content, can’t promise;
– New connection south of Redding to SCS CA Rework;
– Reforma’s Truckee was replaced in some areas, but most of Reforma Truckee remains the same.

Features Reforma Map:
– Now Viva Mexico and all addons for it in one Reforma map;
– Everything goes with one halyard Mega Resources is not needed;
– Added new roads, cities and areas;
– Added new models and textures;
– The correct signs are installed on the American part of the map;
– Improvement of the scenery, especially in the old parts of the Sierra Nevada;
– All map DLC’s is required for this map (Utah, Oregon, Washington, New Mexico, Idaho, and Colorado)