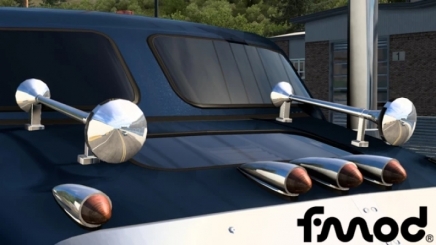 1.05 – Made mod compatible with all versions of the game, at least for now.
ATS 1.04 – International 9900i compatibility.
ATS 1.03 – Fixed issue with airhorn_08 not looping cleanly. This one can be heard with the International/Western Star trucks in ATS, and some horn accessories in ETS2.
ATS 1.02 – Increased the volume of all the horns. They were just a bit too quiet.
ATS 1.01 – Minor volume tweaks.
ATS 1.0 – Original release.
This mod focuses on improving the mixing of every vanilla horn sound available with SCS’s trucks and accessories.
This mod does not replace any horn sounds with new ones, or add new horn sounds. It strictly focuses on making the existing horns sound better. There are three main ways in which these sounds have been improved:
Cleaner Looping & Mixing
Issues with poorly looped sound samples, and issues with sounds “popping” from multiple samples being mixed together badly, have been corrected. Horns will sound smooth and clean with this mod.
Accurate Input Response
Since Fmod was implemented, many players have noticed the “horn lag” issue, where horns will continue playing for a moment after you have released the horn button. I have used a new approach which eliminates this issue, allowing for accurate horn input response.
Volume & Distance Attenuation
Many players have also noticed how obscenely loud some of the horn sounds can be, and how they can be heard clearly from an unrealistically far distance. These issues have been corrected with this mod.

Notes on mod compatibility:
Currently, I do not have soundref files for any mod trucks. If a mod truck references the original soundref files used by the vanilla trucks (such as Overfloater’s K100-E), this mod will work with it. If not, this mod will have no effect. However, if a mod truck uses vanilla horn sounds, but has its own soundref for them, I am open to including support for those mods if requested. I do not intend to redo any completely custom horn sounds though, as this should be up to the modder who made it.
Generally, any mod which affects the vanilla horns, or the cabin sound.sui def file for an individual truck (ATS only), will conflict with this one. This mod should be loaded above any mod which does those things.
Any mod which adds new horn accessories to vanilla trucks should be fine.
This mod contains all of the horn sounds from ETS2 and ATS, even horns which are not used by one of the games (just makes my life easier). This means if you wish to use one of the horns that isn’t in one of those games, like using the Cascadia’s train horn in ETS2, you can reference this mod with yours. I also included “boosted” versions of each of the air horns, which are 2x louder than the standard ones. I use these for the default cabin air horns on the ATS trucks, to balance volume out with the standalone airhorns you can mount on your roof. Basically, the boosted versions are equivalent to 2 roof mounted air horns.

Technical info:
SCS’s original approach to horn sounds generally involved 3 samples. A start sound, loop sound, and an end sound. Not all horns had these though, many only had a loop sample. I have created the missing samples where needed.
In several cases, the existing samples made by SCS were not mixed together well, and some of the loop samples also did not loop cleanly. I have largely corrected these issues to make the horns come together as smoothly as possible from start to end (though you may still detect where some horns loop, nothing is perfect I guess). On top of fixing up the samples themselves, I also merged them into one file per horn. The file contains the start sample and the loop sample, with points set in the file’s metadata to allow it to loop within itself. This avoids a popping sound which can intermittently heard, for example, when near a decent amount of traffic (presumably a game engine or Fmod bug).

As for the horn input response, SCS’s approach requires for the samples to finish playing through entirely after you release the horn button, which easily leads to a perceived delay with input response. This is generally required if you have a dedicated end sample, so I opted to get rid of the end sample for each horn, and instead simulate it dynamically within Fmod. Because of this, I can make the horn stop playing at any time without delay, as it will always have a convincing ending sound regardless of when you let go of the button.

Finally, I made sure to balance the volume of the horns with the rest of the game, and made sure that distance attenuation was set correctly. I also simulate additional reverb and low pass based on your distance from the horn, and your angle from the front of it. If you are far away from the horn, and/or behind it, the sound will be a bit more muffled and reverby than normal. This adds more realism, and can also help you naturally determine if a nearby truck is honking in your direction.