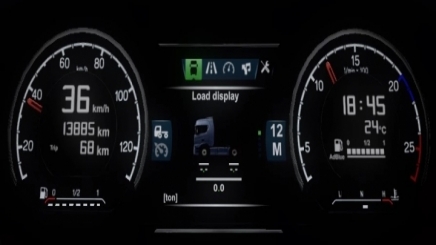 Version 1.8.1:
Made odometer, speed, trip and clock slightly smaller
Replaced the dummy and useless radio icon and station with the cruise control icon and speed

Custom dashboard for the Scania R & S of 2016. Re-arranged elements to have more information at a glance. Larger font sizes make it easier to read. Also has steering animation.
This was originally the work of piva and the help of AlexeyP . This mod has been cancelled by piva

Version History:
1.8:
New update and maintenance taken in charge by NemesysTrans with the permission of piva