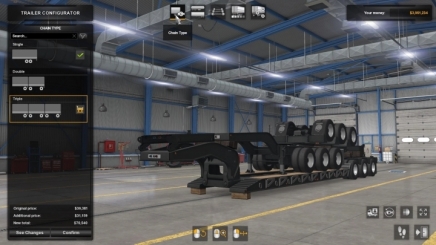 – Purchase stacked trailers from among the SCS Lowboys
– Purchase ONE specific trailer configuration (either ground-Coupled [SCS] or Stacked [EYT]). After ‘using’ it from Trailer Manager, Adjust Trailer (F7) to switch between Coupled and Stacked configurations. When you own one configuration, you automatically own its companions.
– A few customizations now survive through F7 cycle (I’m still working to make more survive). (Some customizations of the base game are disabled because they never survive F7 cycle.)
– Wheel/tire customizations still will NOT survive.
– Paint jobs survive.
– Bodies survive (Wood-Rail, Full Wood, Wood w/Alum)
– Some fenders and mudflaps survive (front & rear):
– (Front will not survive on configurations with JEEPS.)
– (Rear will not survive on configurations with SPREADERS.)
– Front bodies survive on configurations withOUT JEEPS.
– Bumpers with working reverse lights are available on configurations where they make sense. (e.g., trailers that use spreaders do not have reversing lights.)
– When you F7 from stacked to coupled, the coupled trailers automatically spawn with flags, strobes and a banner (‘OVERSIZE LOAD’ or ‘LONG LOAD’ – your choice).
– Cargoes that are long or oversized are labeled ( .. [LONG], .. [OS] ) to guide your trailer-configuration choice.
– Lowboy trailers have more descriptive names, and Trailer Manager is tweaked a bit to show those names.
– Stacked trailers accept all SCS base-game cargo, as well as Forest Machinery, Heavy, Volvo Const Eqp, and a few Oversize Cargoes IF you own the DLCs.
– Custom cargoes exist for ownable, freight-market, and traffic lowboys, and many SCS cargoes are branded (e.g., CAT, Doosan, Hitachi).
– Several custom cargoes exist among parked vehicles.
– Be aware cargo selection does not persist through F7 of trailer, so remember what cargo you’ve chosen if that’s important to you.