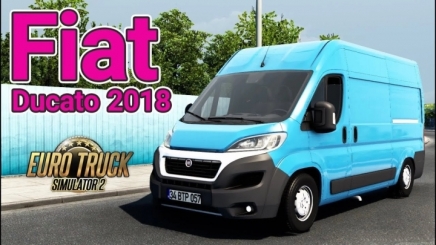 Fiat Ducato 2018 – is a high-poly model of the Fiat Ducato minibus added for ATS / ETS2 players. A utility van / van manufactured by the Italian company Fiat for 40 years since 1981 and is a co-platform for similar cars Citroën Jumper and Peugeot Boxer. These minibuses are produced at factories in Italy, France and Brazil.

The Fiat Ducato cargo van is a nice mod for ETS2 made in high detail. The car has an original interior, sounds and a little tuning. The FIAT Ducato is powered by a single 177 horsepower and 2.0 Bitdi turbodiesel engine mated to a six-speed transmission. The machine supports the transport of small palletized loads. It is also worth considering that this is only a beta version of the minibus, which will be updated and improved from time to time.