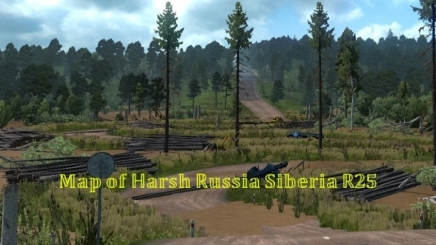 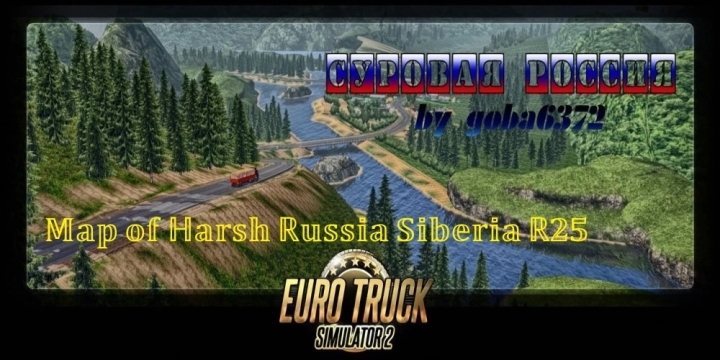 To start the map, you need to disable all DLC ( I sometimes started with DLC, check)
To disable DLC, you can use the commands -no_dlc eut2_east eut2_fr eut2_it eut2_north eut2_balt eut2_balkan_e
They are added either to the steam in the launch parameters, or to the properties of the game shortcut, in the object line after the quotes
In most cases, it is enough to disable only the Goin East DLC with the command -no_dlc eut2_east in steam, separated by a space after the quotes

Description of the map!
the most ambitious project dedicated to the difficult life of a Russian trucker,
the map unites huge areas of Siberian territories while!
As before, you will find the picturesque nature of Siberia and the Russian Far East,
real off-road, pits, potholes, potholes, crossings,
endless repairs of roads or what remains of them,
gravel and primers,
detours that in some cases will have to look for yourself and other surprises!
This map is designed for a certain type of people
who are not afraid of masochism, who have strong nerves,
for those who love simulators, not arcades,
if in doubt, it is better to pass by.
It’s a pleasure to expect from the card – NO, it won’t happen, I say right away,
after a long flight you won’t feel relaxed,
rested, you can quarrel with your family because of nerves …
So decide right away, you need it!!!
If in doubt, it’s better to pass by.

1. Unpack the archive and run the installer Disk1.pak is not required !
2. Wait for the installation to finish and start the game
3. Enable mods in the game. Start a new game or upload a ready profile!