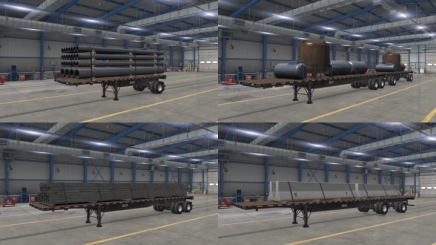 This mod aims to add the so-much-needed variety to the flatbed cargo, providing a bit better experience when hauling flatbed cargo. The mod adds new variants to the original cargo, as well as brand new cargo (some of them are also ported from ETS2).

– The cargoes are set to spawn at the same companies as the other cargoes or their variants. So, you won’t spot them on the freight market that easily. The cargo market for ownable trailers, on the other hand, is much richer with them.
– When using cargo market for ownable trailer, the new variants can be easily distinguished – the original cargoes use their dedicated icon, while the new ones directly show them placed on your trailer.
– If you see the same cargo with two (or even three) different weights, or if you see two different cargoes with the same weight, it’s because of various limitations – for example, the gross vehicle weight limit is set differently in each country, and if you are using trailer with fewer axles, the game will also limit the cargo weight to the weight limit for that trailer. So, different cargo weights are not a problem of my mod – they’re a problem of the game.
– You would probably need to manually reset game economy to get these cargoes spawned in freight market. Use command “g_force_economy_reset 1” and reload your game. Note that it will return you back to your garage and will cancel your current job.
– The mod should be put above the other cargo-reworking mods in the mod manager, because it overrides some of the original cargo files.
– The new cargo might not work with modded flatbeds on its own. If this was the case, either you, or the mod developer, would need to add some definition files to this package to make it work.