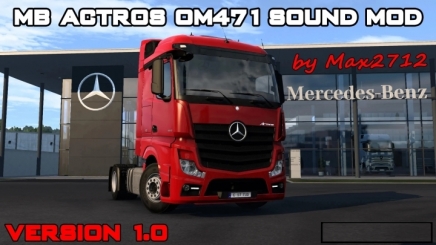 Sound pack for the Mercedes New Actros for ETS2, consisting of high-quality sound samples recorded on a 2018 Mercedes Arocs 3248 (the off-road Actros), equipped with the 12.8 l OM471 engine.
All sounds which you can hear on the real Actros have been professionally recorded using studio audio equipment, such as the engine, all interior sticks, switches and tones, the gearbox, the air-brakes.
Compatible with the Actros MP4 by SCS, Schumi or Galimim, the Actros MP5 by HRS, the Actros & Arocs SLT by WTD and the Antos by D3S, for all engines available.
Also compatible with Galimim’s Mercedes Drivetrain Revision mod.

Features:
Extremely detailed engine sound recorded every 100 rpms in 4+1 channel format with 4 synchronized microphones placed around the engine & the exhaust
Each interior switch, stick and warning tone recorded from the real truck and implemented into the game (e.g. blinkers, blinker stick, retarder stick, light switch, electric windows, etc.)
Many brand-new features have been implemented that aren’t part of the base mechanics due to a lot of programming and testing
Dynamic idle sound
Warning tone when turning off the engine without parking brake or with lights on
Multiple sound samples for one sound event (e.g. light switch with 3 different sounds, multiple engine start/stop sounds, different sounds for light-beam on/off, …)
Air sounds when engaging/disengaging the parking brake
Multiple sounds that are only triggered under certain driving conditions (e.g. engine brake engaging when shifting up for faster gear changes)
3-stage engine brake with own sounds for each stage
Many details such as start/stop-button sounds when starting/stopping the engine, button sounds for raising/lowering the lift-axle, gear selector sound when shifting into reverse and much more
Mercedes-Powershift-3 gearbox sounds with different variations depending on the driving situation
Custom sound attenuation config for the truck cabin to have a very realistic sound insulation in the interior (ETS2 1.43 and above only!)
Every sound placed in the correct 3D-position (interior + exterior)
Other things I can’t remember anymore but which you’ll notice if you listen close enough