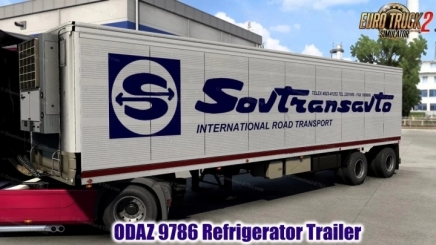 OdAZ-9786 – a two-axle refrigerated semi-trailer of the late USSR, the semi-trailer was mass-produced by the Odessa Automobile Assembly Plant in the 80s.
The semi-trailer OdAZ-9786 will be an excellent addition, especially when used in conjunction with tractors of the Soviet period. OdAZ-9786 has a high-quality 3D model and SovTransAvto skin, the semi-trailer is available for purchase and is capable of transporting various cargoes, including perishable goods.