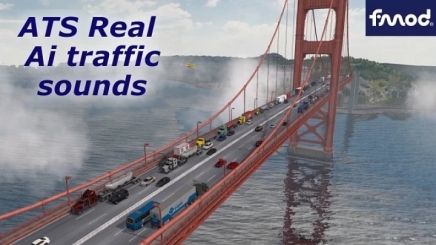 Real Ai Traffic Engine Sounds mod is the most ambitious sound project destinated to Ai traffic which has introduced personalized engine sounds for almost all cars, SUVs, trucks and buses of the ATS default vehicles.

With the transition to FMOD, a completely different sound system, all sounds from this mod had to be reworked and introduced in FMOD under banks and events in order to work in ATS 1.37 and up

As a legacy from previous version, the covered vehicles received also tweaked max_speed values and engine_power.

Authors: Credits and Author rights:-the main source of sounds is YouTube. sound engines are identified, converted, processed, which is entirely my work.-few sounds are recycled sounds from other old sound mods for traffic and trucks-SCS and FMOD for the sounds project template and the FMOD program