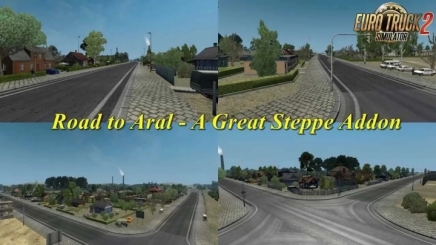 What’s in it?
A simple map of the steppe-like Area southeast of Aktobe.
Parts of the Aralkum Desert
4 cities: Shalkar, Kalybay, Embi and Aralsk/Aral
In Aral, you can take a break at the former shore of this once giant lake.
A sparsely populated post-soviet landscape
Gas stations
Some small villages
Abandoned settlements and factories
Some small details
You need all DLC’s (except Iberia) & The Great Steppe!
Put the map ABOVE The Great Steppe!
Compatibility for 1.46