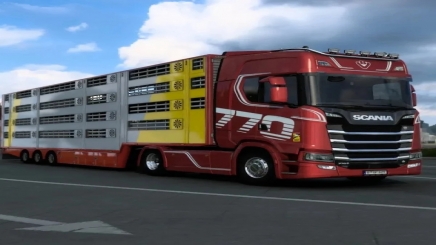 The mod adds sounds for the Scania NG DC13 and V8 engine to the game.

Peculiarities:
The source files were personally recorded by Kriechbaum using the Zoom H5 audio recorder on a real Scania NG R450.
Absolutely all sounds are recorded, including the sound of windows.
The mod also includes a revised retarder sound.
Works on default Scania NG and Scania P/G/R/S series by Eugene.
Supports convoy mode.
To work correctly in the sound settings in the game, all sliders must be set to 50% (default settings).

Changes:
update for patch 1.46
Installation: copy the downloaded file to the mod folder and connect it in the mod manager.