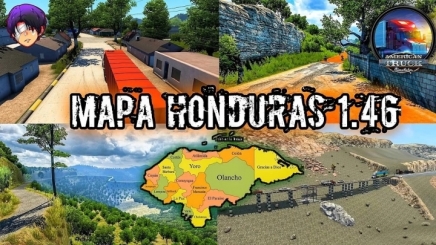 West of Honduras Map – is a real scale map from the west part of Honduras added in ATS game for free to play and download. According to the authors, the new truck released by SCS Software ,,International Lonestar” can be purchased in the town of San Jerónimo.

– A lot of dirt roads

– Replaced the texture of the Road

– Added skins of Central American or American companies common in the area.

– Added the option to show the price of merchandise and earnings in local currency.

– Error solution in companies and garages.

– Improvement of performance in wooded areas.

– Added points of interest to the map in deviations to towns.

– New concrete barriers on the road.

– Optional DLC: UTAH (not entirely necessary, it was tested without it and it works, but if you have it much better).