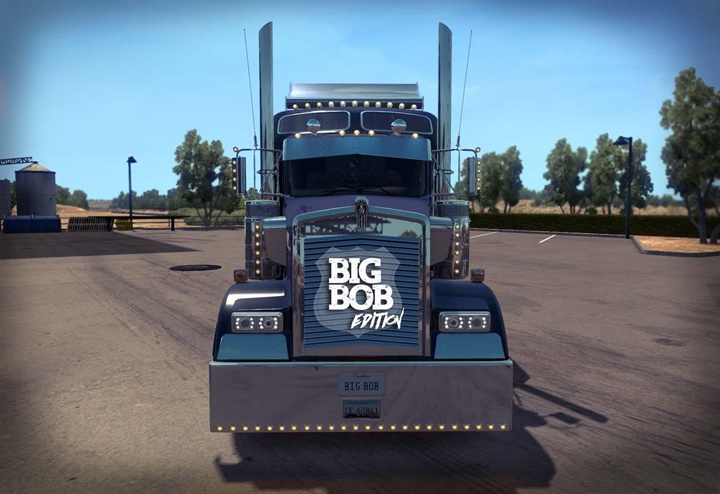 model independent, does not change the default W900l
bought in the cabin Kenworth

revision and correction of default model SCS.
– Eventually 3 types of cabin: default (Aerocab Sleeper 72 inch)
with vents (Aerocab Sleeper 72 inch) and increased the factory (Studio Sleeper 86 inch).
–default day cab, and frame for them was removed.
–3 types of sleeping bag in intrieri corresponding to the cabs.
*–Replaced the interiors in the external models to the internal HD.
– Changed the geometry of the opening front Windows, aligned to the external model
the point of fixing of the canopy also meets the external model.
Windshield stand more upright, are consistent with the external models
*–3 frames (265 inches), 3 frames (275 inches), 1 frame (285 inches),1 frame (295 inches),1 frame (305 inches).
*–the track of the front wheels is reduced, in accordance with the real.
*–steps, toolbox, auxualy power(odd_fellow), added in the accessory section
**–4 completely new bumper (20 inches) with the possibility of installation of the driver plate.
*–Added 3 CBS stations in the interior, repurposed materials.station a separate slot.
–Added to the interior 3 of the shift lever,
one stock and the second long, with vozmozhnostyu tuning.
*–Reconfigured almost all materials and textures on the truck and in the interior.
–Of the interior now you can see the antenna on the bars mirrors.
–Canted grille in accordance with the actual geometry (by default it is vertical).
– Made a brighter red nameplate on the hood.
–Reduce by 10 percent the size of the mirrors on the hood.
–The suspension made softer on all frames, now nice ride rocking more default very oak.
–Reconfiguring the camera in the cabin, 67 fov and other settings turning the head.
–Increased the range point settings of the camera, by default it was impossible closer to the dash to install the camera.
*–Replaced the default model radio, model odd_fellow, set up the materials. radio a separate slot.
–Reconfigured the glow of the instruments.
*- In the Exclusive salons and Smoke illumination devices and computer blue by PIVA.
**–The standard salon lighting yellowish and stock computer
**- Added anchor points for accessory pack of SISL (my version of the pack that goes along with this mod)
*–The engine is now painted himself in the choice of the engine itself.
–Did the material of the headlights is separate from the Windows of the cabin.
–Set up the reflection glass in the cabin and on the external model.
*–the plate on the bumper where you can write text.
*–moved the flags oversize on the bumper.
*–the ends of the wings of the hood is more rounded than the default.
**–add 7 variant grill hood
**–add 5 sunshield visors
**–Kriechbaum sound & engines adapted
**–exhaust smoke.
**–the light in the cabin, is operated by the button “u”
**- and much more…
*–a set of details attached to certain items and will not be active on the other.